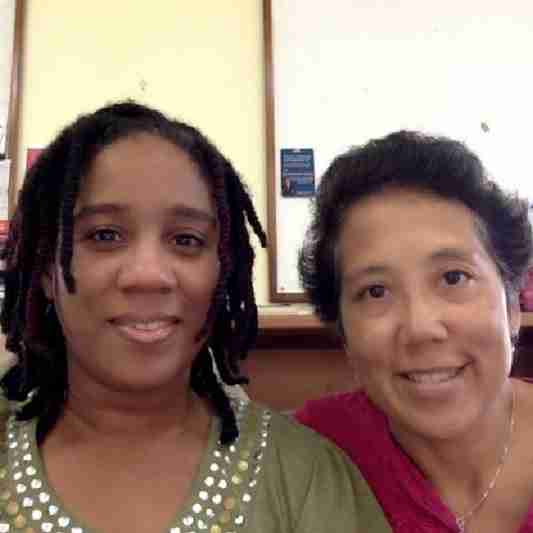 Spotlight Saturday! (just for this month)

Well if you don’t know, you’re about to find out.

As you know every month I spotlight a person who’s been very influential in my business.

As you can imagine I can probably list many people.

But this month I’m bringing it home.

Bernadette is my business partner.

And we represent Marketing Moms Trinidad!

This business partnership was born out shall we say “mere” friendship and mutual respect.

Bernadette as a Model Mother

Before we became business partners I already looked up to Bernadette because of how she lives her life!

I wanted to be a really good wife and mother.

Now I’m not saying that Bernie (or Aunty Beenie as my 20 month old daughter calls her) is a perfect wife and mother,

but she has sure set a good example for many young mothers to follow.

Bernie is the mother of seven!

Yes I said it seven!

So where does my spotlight Friday mother find time for a business?

I wondered the same thing until I watched her.

When I saw what she was doing through Elite Marketing Pro I realized I needed to pay CLOSE attention.

You learn best from leaders if you observe carefully what they do.

Yes you listen to everything they say. But more importantly you have to observe and follow what they do.

Let me give you a parenting example.

I was in the company of Bernie and her husband with Olivia my daughter.

I would show her an object and say “A Ah Apple”

and so on and so forth.

They both cracked up at me!

Bernie said that I would confuse the child!

“Don’t worry Hilary she will figure out the sounds. You don’t want her going around saying a ah ah apple. B buh buh buh book!”

Just say the words naturally and she will catch them.

The second parenting example was specifically what words to say.

I realized that Olivia loved to tell me “No”

“Have you ever counted how many times you say No to her?” was Bernie’s question to me.

Being an engineer I took her up on the experiment.

Apparently in hour of Olivia being awake and running around I said the word “No” 32 times!

No wonder all she says back to me is “No”.

So you know what word I’ve been trying to remove from my vocabulary.

Being a Mother and Being a Business Owner

But you’re probably wondering how does that translate to business.

They are not that different as Bernie has been able to show me over the past few months of working together.

Building an online business takes breaking down old habits and forming new ones.

Bernie has been instrumental is helping me along that path especially with my “human interactions”.

I don’t want to, nor like to admit it, but I do fall into that stereotype of Engineers not being “human”.

We like to put everything into a process, into a system, into something NOT human.

Bernie has been helping me understand not only how to raise my daughter but also how to deal with people.

For example one of my biggest fears is interacting with people.

That’s why I choose my particular profession of engineering.

I’ve been to more social events since starting to work with Bernie than I’ve been to in the last five years.

Yes I have no clue what to say or do, but I’m doing it.

Because she’s a great mentor when it comes to dealing with people.

She pushes you out of your comfort zone.

And the beauty is we help each other.

If you’ve dealt with seven children I’m pretty convinced you can deal with anything and anyone! (My mother-in-law demonstrates the same characteristics)

(in case you’re an engineer like me and you didn’t understand that reference to my mother-in-law. My husband is the first of seven)

And if you were born into Facebook like I did then I have a few things I can teach her.

Our mastermind builds each other.

We lean on each other for so many things that we really do make a wonderful and dynamic duo.

Cheers to my spotlight business partner this month!

I could not have made it to where I am without your help!

I’m Hilary De Freitas
Online Marketer, Engineering Nerd and Mom
P.S
I invite you join my newsletter and you will learn how to continue to grow your business online.
P.P.S
My goal here is to help you learn how to market and build a successful business online.
Join today and get one free 30 minute Marketing Training with me then join my mastermind to learn more