If I ever hears someone tell me that they don’t need anymore customers I’d be shocked out of my pants. 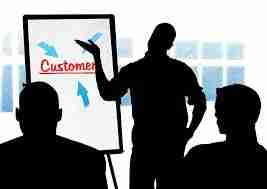 Actually no I won’t be shocked – I’d just assume that they are not in business.

Because if you’re in business you want more leads, sales and customers

That’s just the nature of the game.

Now if you have some really loyal customers who buy from you over and over again then you’re set for a while. (I wouldn’t say life)

But how do you get to that stage.

I was on a webinar the other night, putting off part of my DMO in order to jump on this webinar. The copy of the webinar registration page was just so compelling that I had to jump on!

Anywho! The only reason I was on was because I like the guy who gave the webinar, I follow everything he does online and I’ve purchased a few things from him before.

You see I know he sells on every webinar he gives, but that night what he was selling – I didn’t purchase.

And here’s why I didn’t purchase

Because for the first time I felt like he was trying too hard to sell.

The second reason I didn’t buy is because he was actually selling something that I already have access to. (kinda)

Now the companies are NOT the same, but he was promoting a system very much like Elite Marketing Pro.

I was a little taken a back, because I realized right there and then that he had jumped to another shiny object.

So immediately I learned two lessons that you should learn as well. Actually three.

1. Don’t take your following for granted.

To cut a long story short, for the first time I felt used! Now I know at some point in time you become like a number. But if large insurance companies can strive to make me “feel” important then so should this guy and so should you!

Mary Kay Ash used to say, “Everyone has an invsisbile sign around their neck saying, ‘ Make me feel important’ ”

No one wants to be sold but everyone wants to buy. Everyone knows about the “pushy” car dealership sales man. We’ve ALL experienced him, unless of course you’ve never purchased a car. But ask yourself honestly, do you “love” going shopping for a car? Don’t you have to work yourself up before you enter that lot?

So let’s take that feeling now and put it on YOUR customers. If they feel that way about you and your business, are you going to have a hard or easy time trying to get them to buy your product?

Most times people who are selling too hard are doing so because they don’t really know what their customers want, and they will sell them ANYTHING!

3. Focus and Stay the Course.

If you’re jumping from one place to the next then it sends a message of uncertainty. I don’t want to follow someone that is uncertain of what they’re doing.

Now you’ll find tons of people doing that – they jump from one system to the next, one product to the next thinking they will get the answer there! Thinking they’ll make more money with this system, this company, this comp plan!

But they’re not going to. That’s the reality

When you’re in a program like I am with Elite Marketing Pro, you have to stick with it, work the system, learn everything there is in the system and then create your own system.

That’s it. If you’re not at the stage where you’re creating a business like the one you’re currently learning from then you’re not there yet!

You don’t have to do anything else.

So when people tell me, “Come join me over here in so and so company” I just smile and nod and say in my mind of course, “what a shame, they got caught.”

If you’re ever going to be a true business owner you have to stick with one thing for a very long time until it works and you will see success come. To this day I’m still amazed to hear stories of successful network marketers who’ve been working – yes working – that business for the past 22 years! It’s mind blowing that someone would stick with a network marketing company for that long.

But if you chase after the new kid on the block you’ll end up in divorce court every Monday morning.

Every successful person will tell you that.

So that’s what I’ve decided to do – Stick with Elite Marketing Pro.

Just last night we were on our weekly Monday Mojo with a guy who is NOW killing it. But he’s been working this business with Elite Marketing Pro for the last FIVE YEARS.

You can check out the replay RIGHT HERE. He’s making $3K a month now and that’s just from Elite Marketing Pro. But it took him five years to get there.

Now I love my friend and everything he does but I believe what he’s doing right now by jumping from company to company is going to hurt his business more in the long run.

And he’ll probably end up losing a lot of his once loyal customers. So he’ll need to get back into the trenches eventually and start developing those skills to get  more traffic, leads and sales.

In fact, if you’re ready to get into the trenches, with just $10 and 10 minutes a day, you can create an entire “traffic ecosystem” that self-perpetuates, generates it’s own momentum, and becomes increasingly effective and profitable with each additional dollar you invest.Interested in learning more?Well, get registered for this 100% FREE traffic workshop hosted by none other than my friend and mentor Tim Erway, CEO of Elite Marketing Pro.You’ll see a case study of how a $10 test campaign turned into $141,246.30 in sales.And in fact…Tim reveals the exact strategy that many of his students have used to generate over 75,000 leads and earn $850,281 online, over the past two and a half years.So if you haven’t registered yet, what are you waiting for?Just pick a time that works for you to attend Tim’s traffic workshop right here